Kenna and Tyler are the friends I didn’t know I had. From the second we got on the phone for the engagement session it was fantastic. Kenna & Tyler have such big hearts and they are absolutely super cool people. Tyler works for the Air Force and Kenna works in administration for her job. Both pretty new to Florida themselves we wanted to look for a location that would really “encompass” the Floridian feel for the engagement session.

It all started when Kenna had already been living at an apartment in downtown Tampa for about a year and a half. Then when Tyler got stationed at MacDill AFB, he searched around and ended up signing a lease in the same building as her. According to Kenna the pool area at the complex is where you want to be on most weekends in the summertime due to its being a great way to have fun soaking in the sun or meet people if you’re new.

So, on one warm Sunday in August Tyler had just finished a workout and decided to go hang out by the pool and make some new friends. Kenna was already down there with some other residents when she saw him walk out and start making conversation with a small group of people.

Kenna remembers thinking to herself; “okay who’s that, is he new?” They both had sunglasses on, so they didn’t exactly catch eyes at first, but after a few minutes, he started making his way over to her. As Tyler describes it, he saw Kenna and knew that he couldn’t let the opportunity pass to at least go over and introduce himself. After all, he was new in town, so he had a built-in reason to go and shoot his shot with Kenna.

They ended up talking down by the pool for four hours that day; they had talked about everything from family, faith to football. They even talked about how many kids they both wanted! Since they are both avid football and sports junkies, Kenna had her fantasy football draft the next day after work, so she asked him if he would swing by to help her draft some of her players since he played in college and knew a lot about the league.

Kenna says she didn’t need his help of course, but now it was her turn to come up with a reason to see him again—he told her he wouldn’t miss it. The rest is history after that, and they have been together ever since!

Tyler’s dad raised his brothers and him to spare no amount of effort in order to make the woman you love happy, as well as to make her feel like she’s the most special woman in the world. So, Tyler knew that when he was ready to propose that he had to do something meaningful. Kenna and Tyler spent this past Christmas of 2019, with her family up in Wisconsin, and after he got the blessing from her family and showed them the ring.

He made the decision that he would ask for her hand in marriage three weeks from then. He spent those three weeks mulling over ideas and grabbing inspiration from here and there. Tyler loves to write, and throughout the course of their relationship, he would write little love letters or notes and leave them scattered around for her to find, so he knew he wanted to find some way to incorporate that somehow, but he also wanted the proposal to be fun and memorable.

On the morning of their engagement, Kenna had woke up to a note from Tyler saying that he had scheduled a nail appointment for her at her favorite nail salon at noon, and to not call him or text him, but to just go to the salon and await further instructions there. Tyler related that getting Kenna to follow instructions can be challenging at times because she doesn’t like not knowing things, so he was a little nervous about this part—reluctantly she went.

What she didn’t know was that Tyler was out placing a series of love letters throughout South Tampa at places that served as memorable milestones throughout their relationship. Every letter had a clue that led to the next letter at the next location. Tyler called it her “Amazing Race through South Tampa”. He picked up her close friend and dropped her off at the nail salon to give her the first clue, but also to be her guide in case she got stuck.

Tyler continued to plant letters at Raymond James Stadium, Radiant Church, Cinebistro, The Sail, and Columbia Restaurant because those are all places that they had either had incredible memories or big milestones in their relationship. Tyler had just as much fun hiding the letters because he got to coordinate with the staff at these establishments and bring them in on the plan; to see how happy people were to be a part of it was truly heartwarming to him.

The final letter was back in her apartment where, while she was out all day, he laid out flowers in her room, a few outfits to pick from, and a note telling her to meet him on the rooftop of our apartment building.

There was one final letter for her on the door that led out to the rooftop asking her if she was ready to step into the rest of their lives together. There Tyler was, waiting on the other side of that door on a bended knee, and that’s how he asked the love of his life to marry him.

Fort De Soto Park in St. Petersburg is quite the spot for an engagement session location. The largest park within the Pinellas County Park System, Fort De Soto Park consists of 1,136 acres made up of five interconnected islands (keys).

These keys are home to beach plants, mangroves, wetlands, palm hammocks, hardwoods, and scores of native plants. Each of these species plays a vital role in the preservation and protection of the natural environment. It also houses an old battery ruins on the beach which gives this location even more of a historical vibe.

We started this engagement session out by the backside of the fort. Kenna & Tyler looked absolutely stunning and they just fell perfectly into place with this location. Throughout the engagement session, we cracked jokes and had tons of fun. One of the things I love to do during an engagement session is to stay really focused on the intimate moments between the couple. 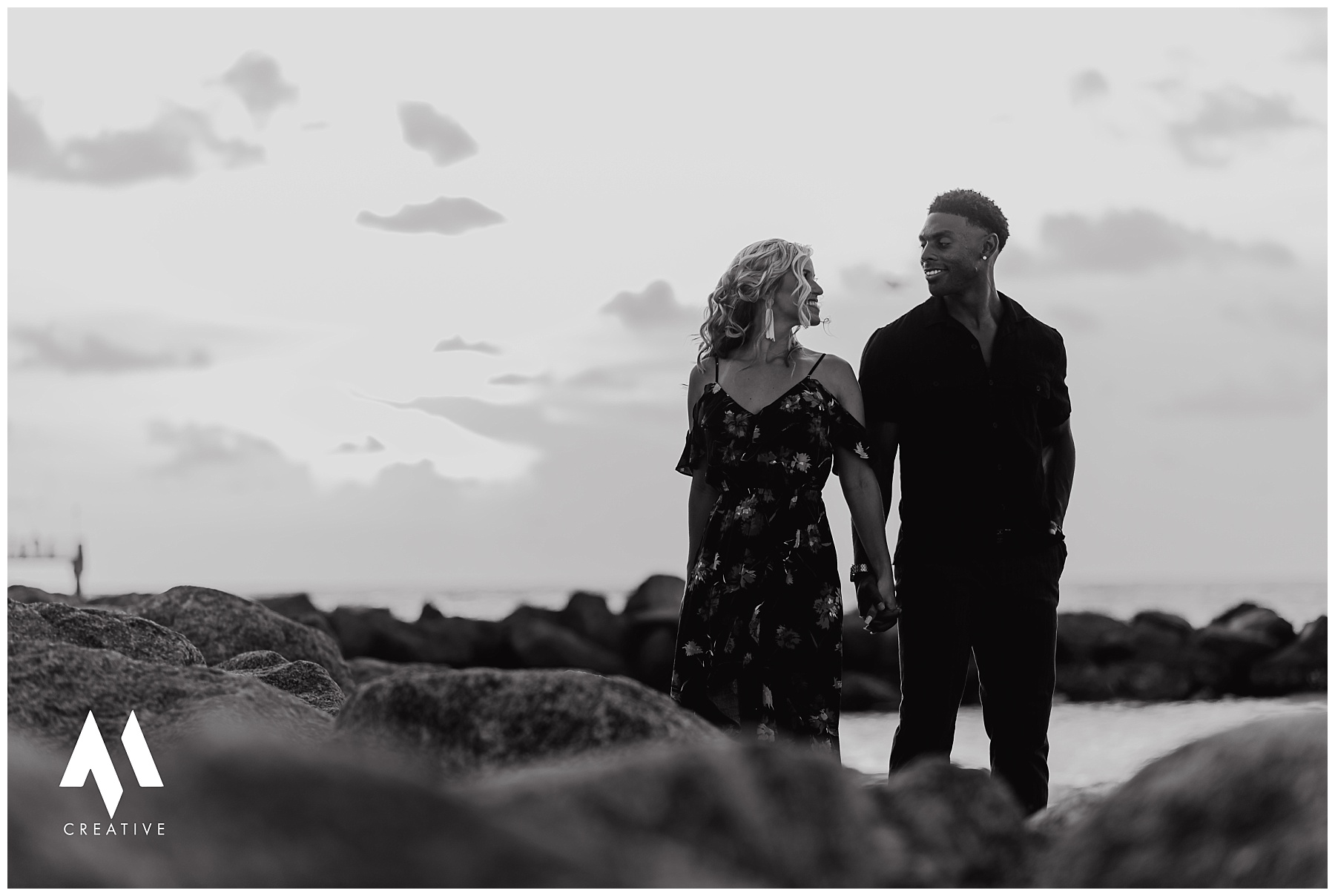 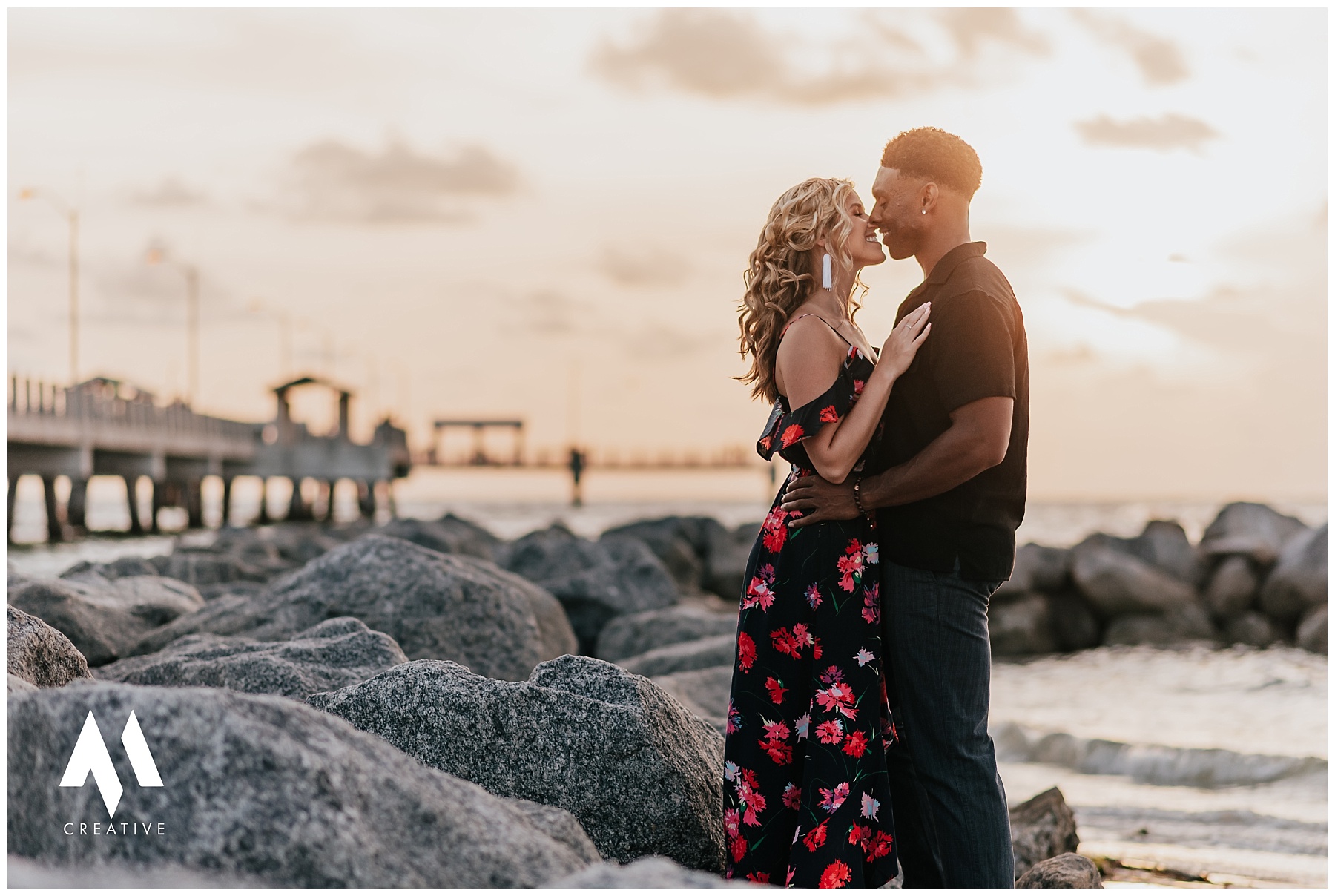 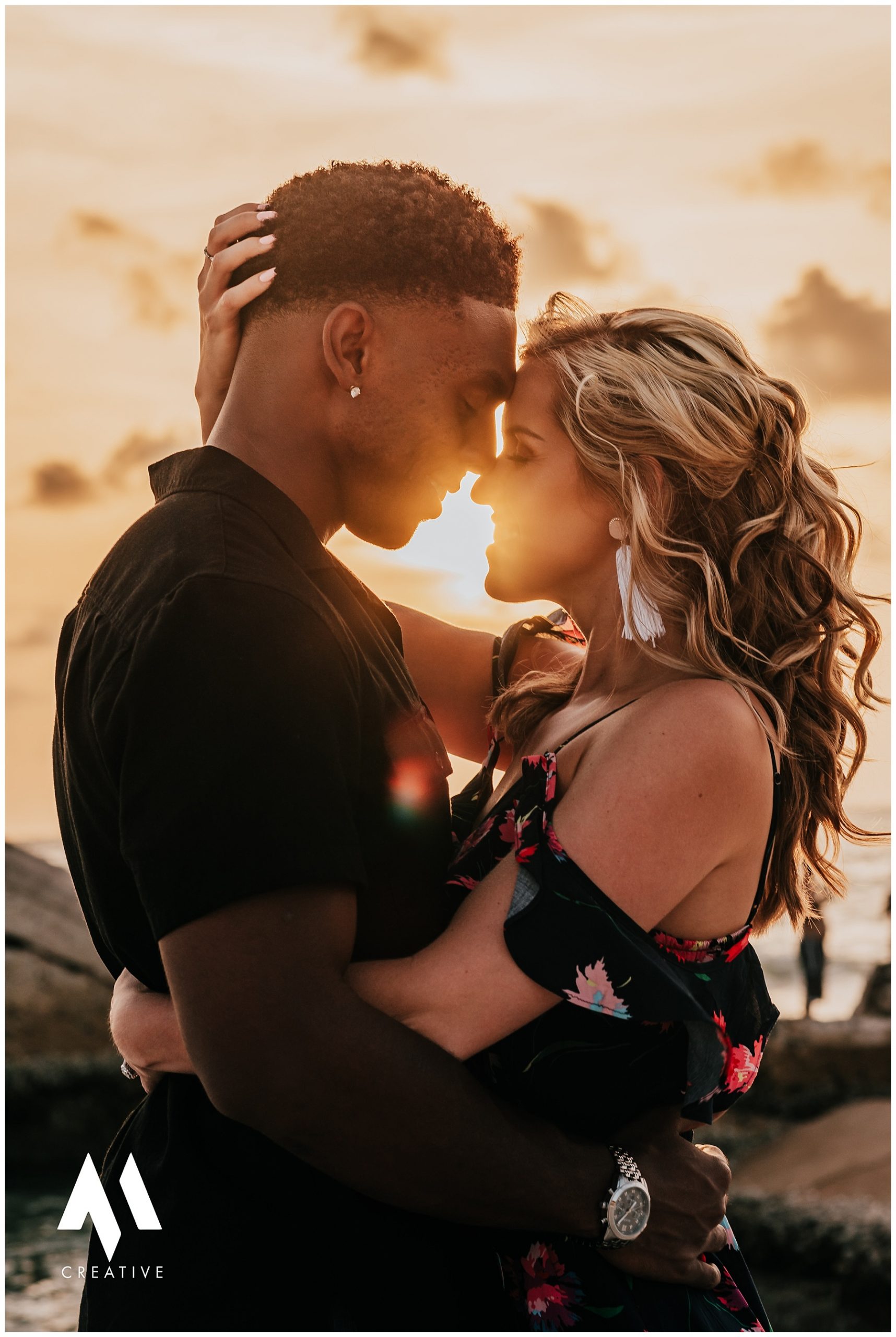 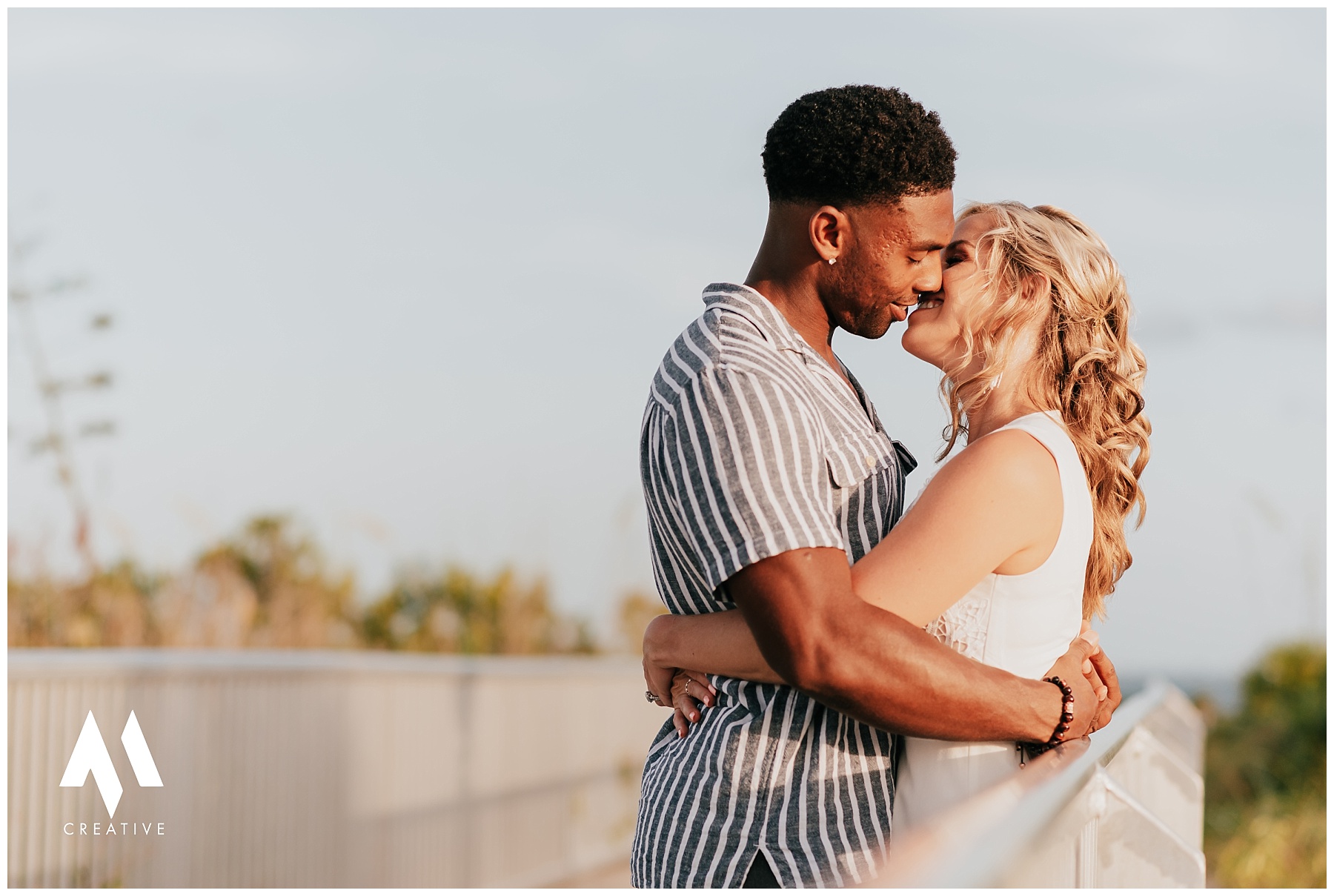 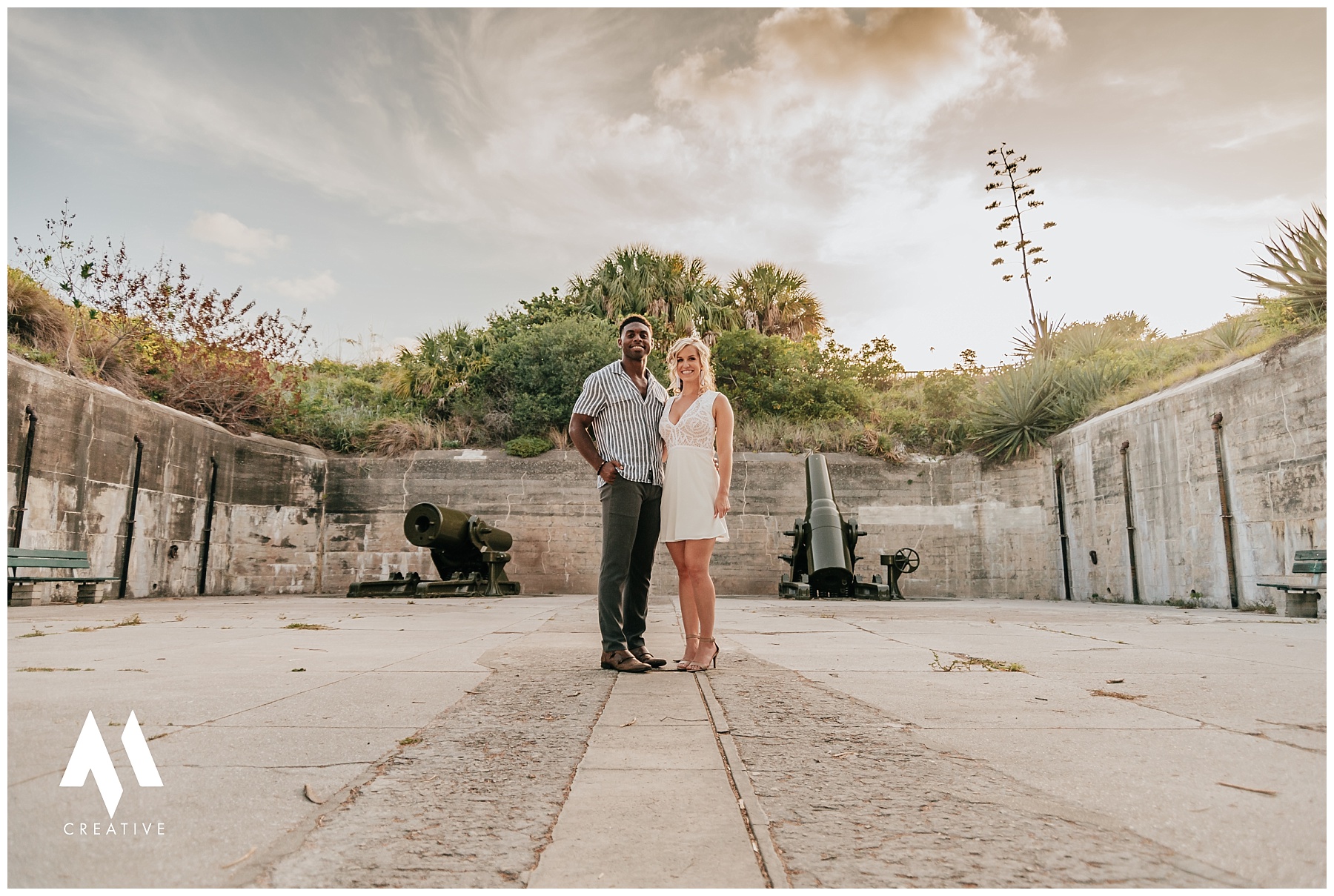 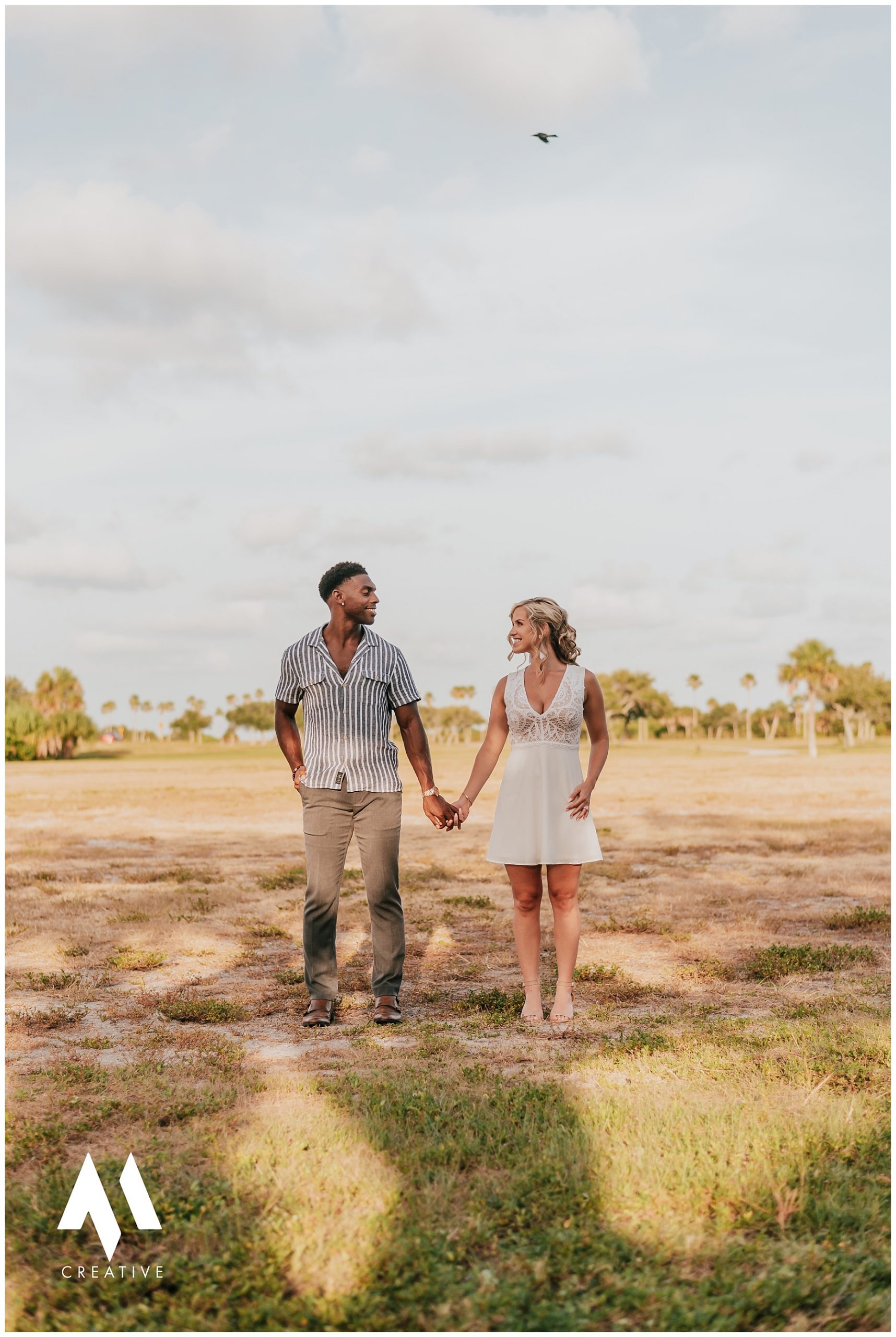 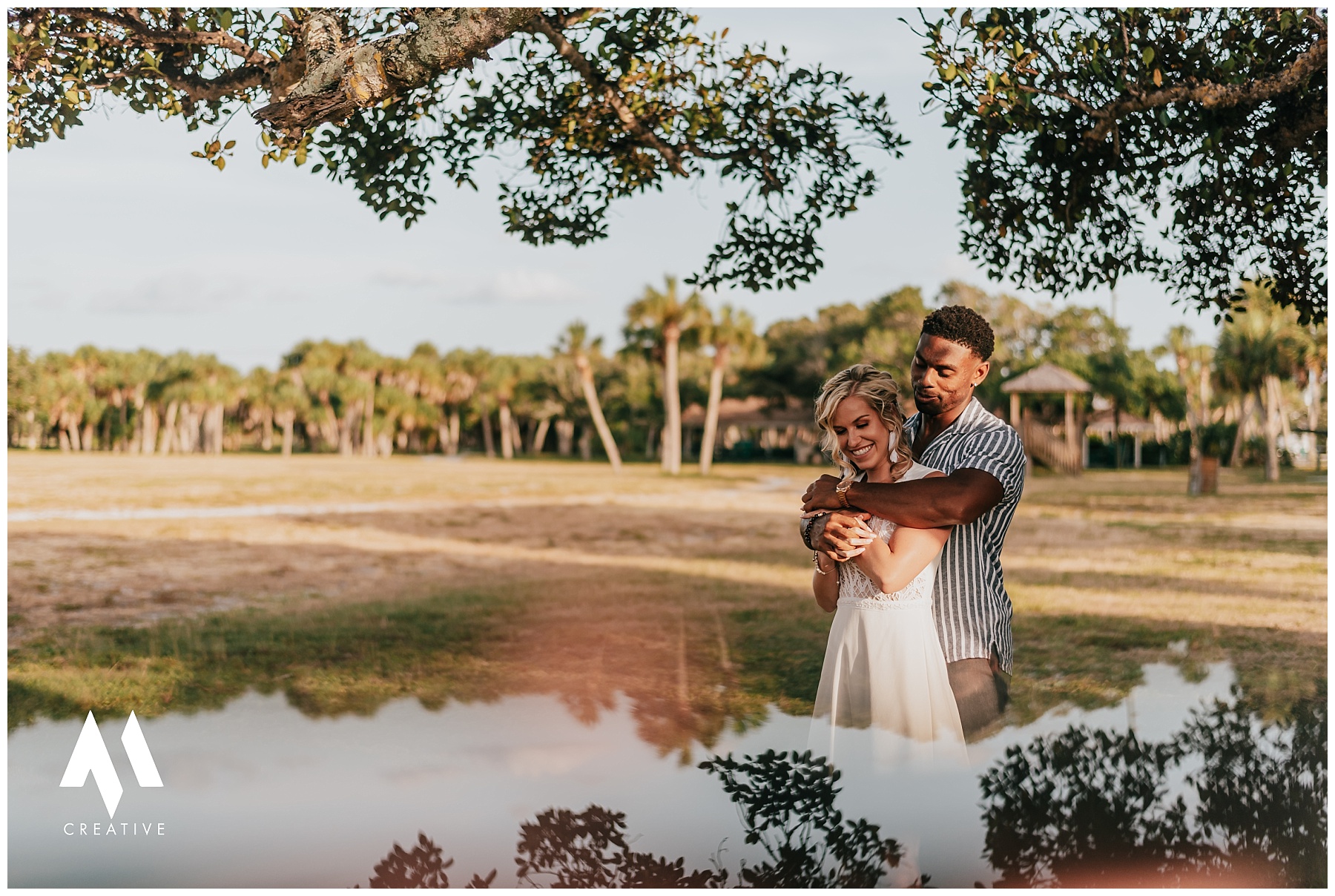 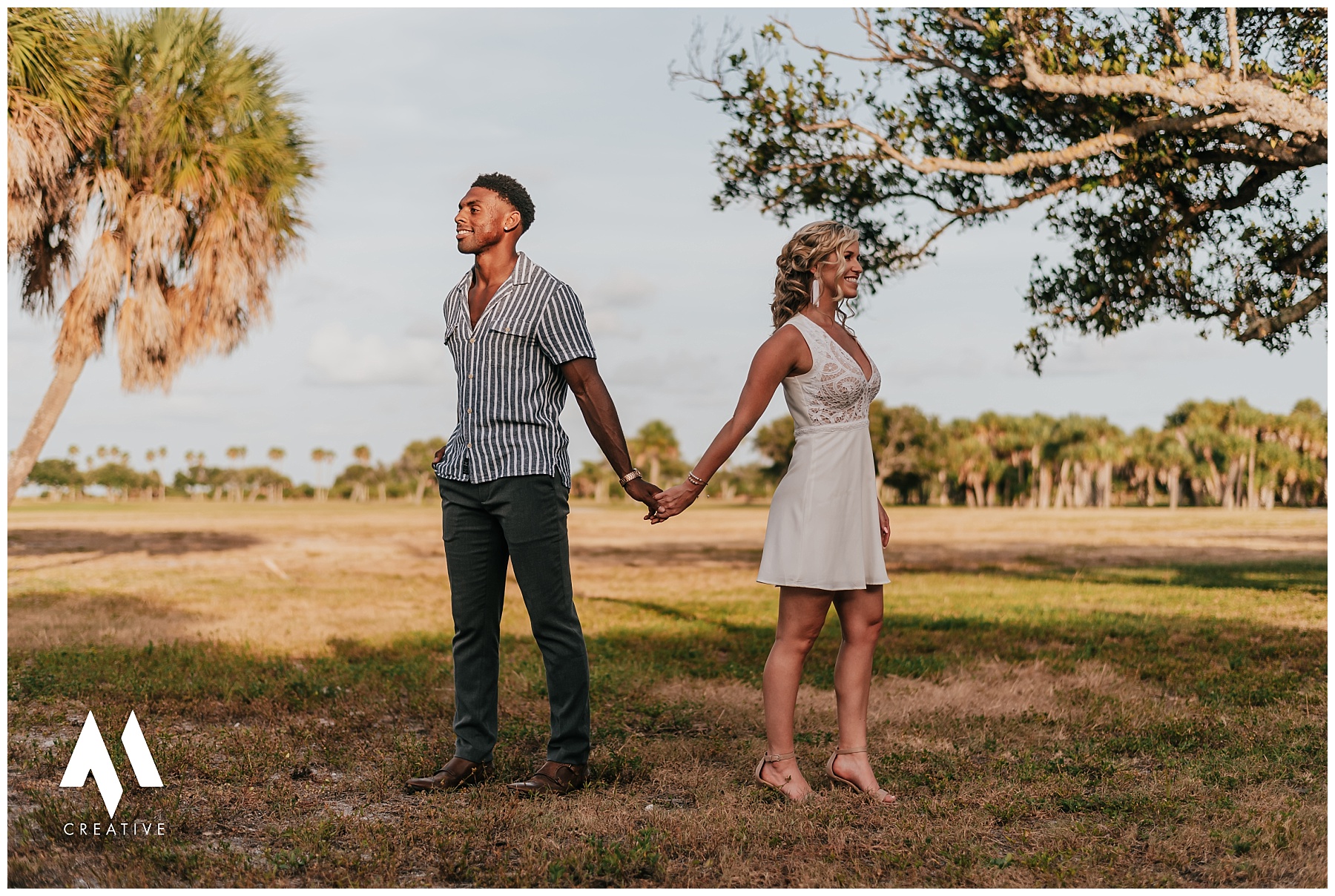 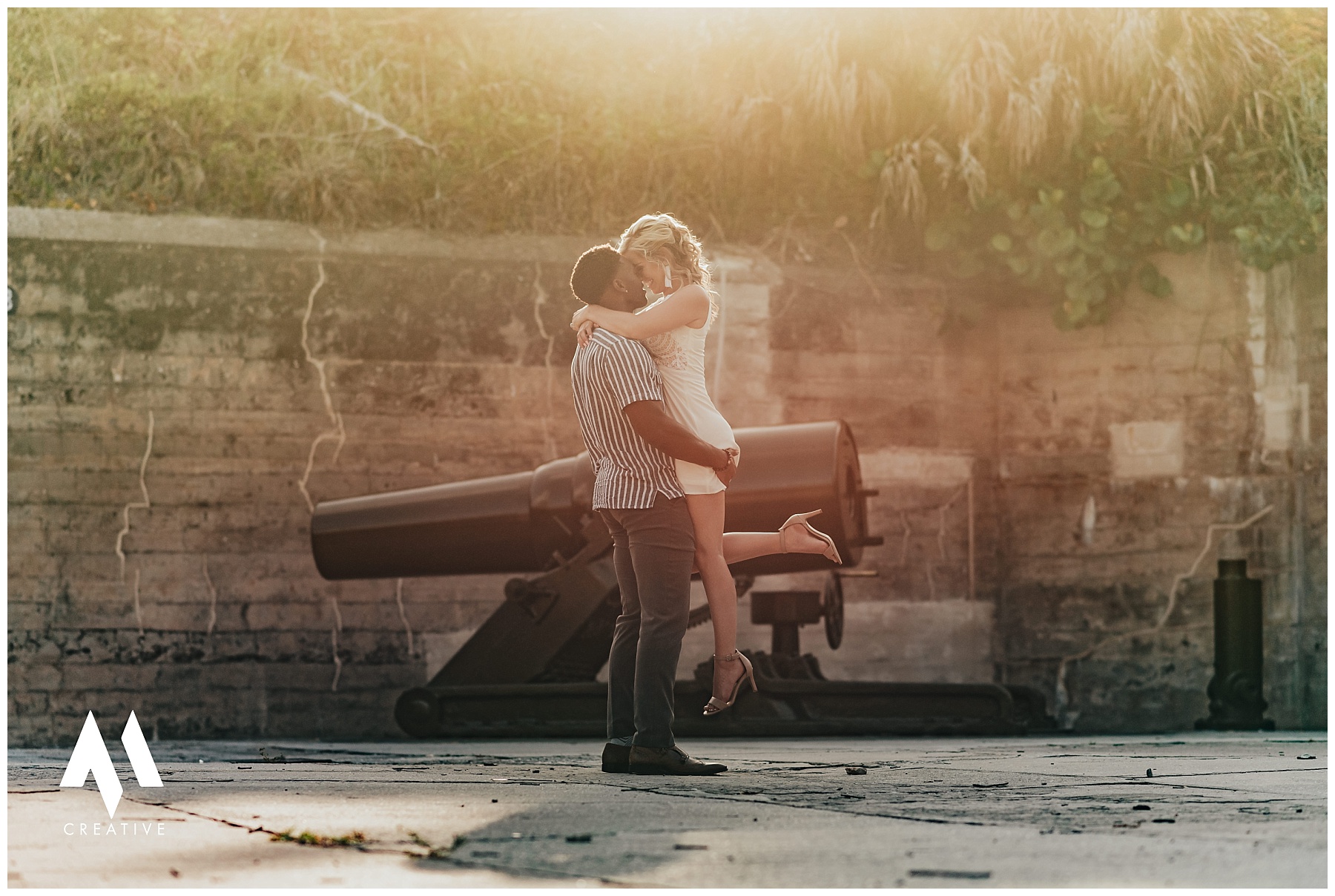 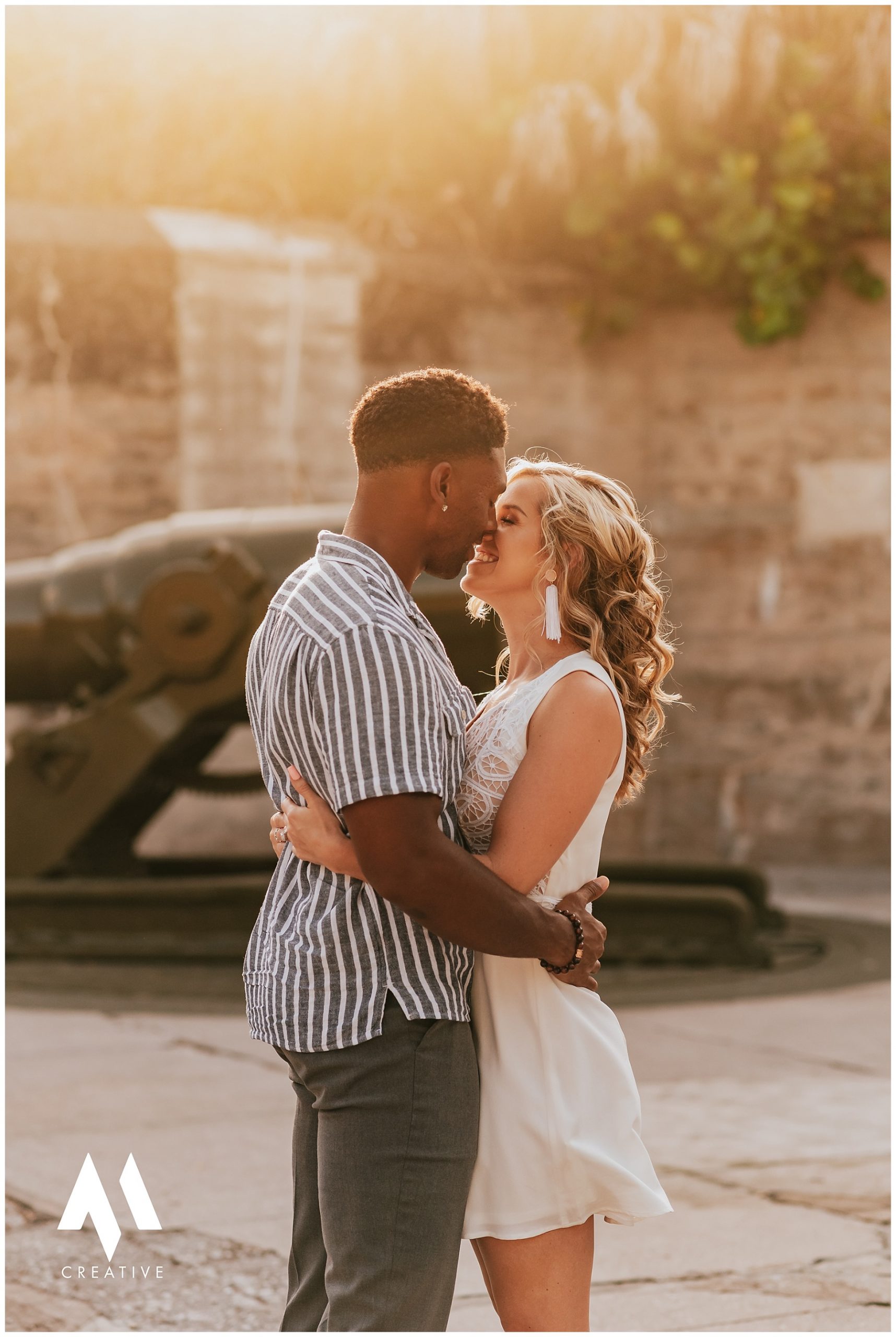 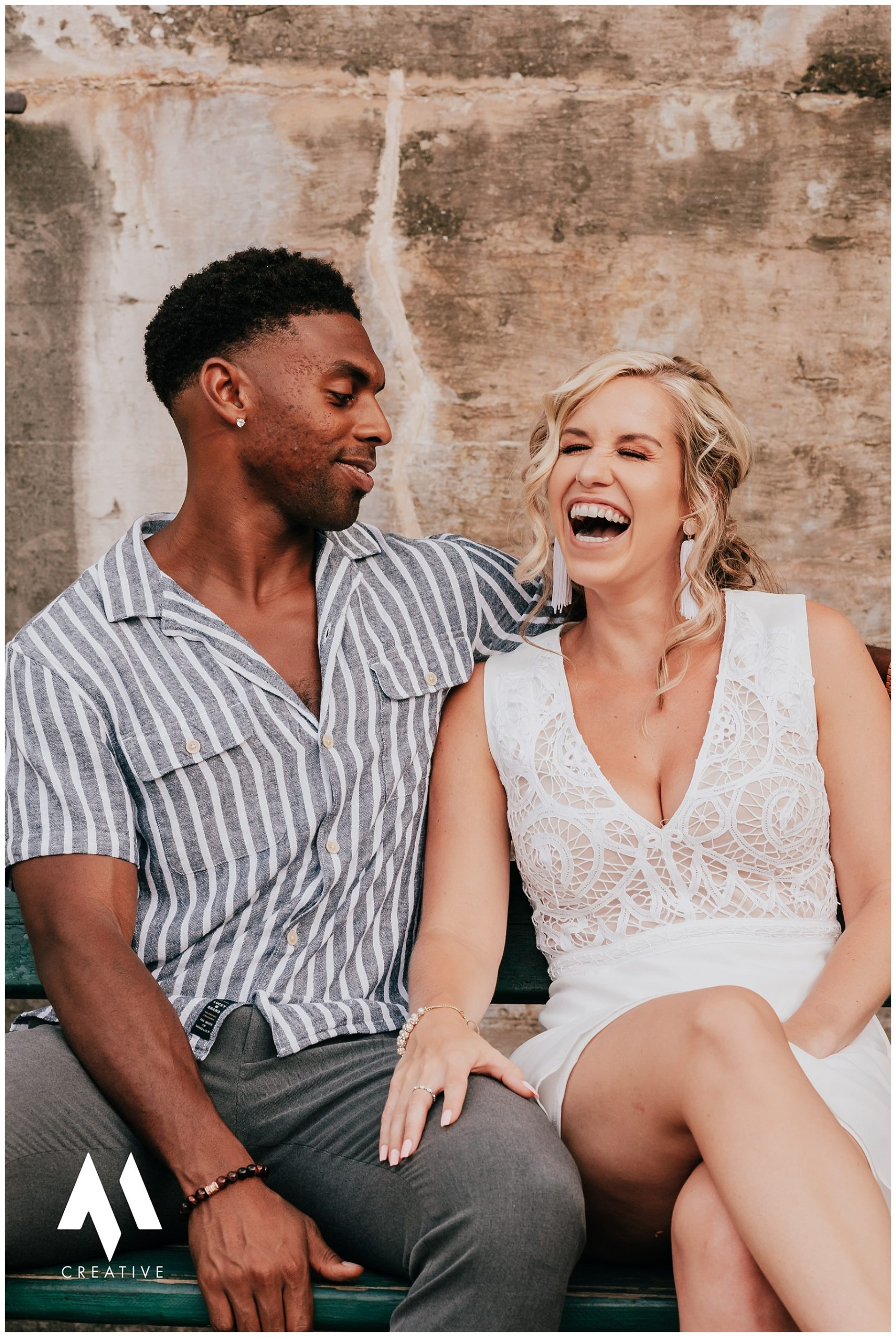 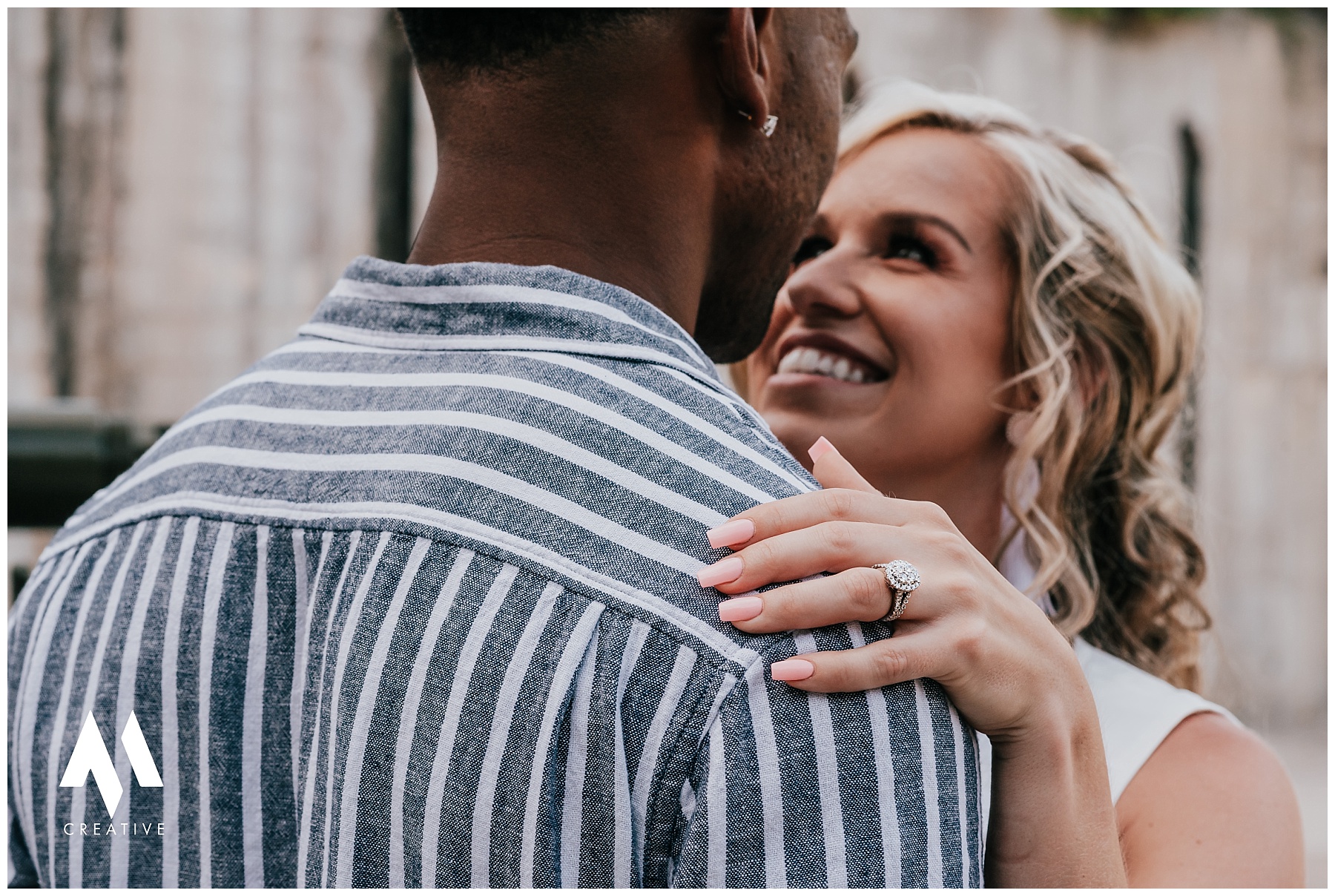 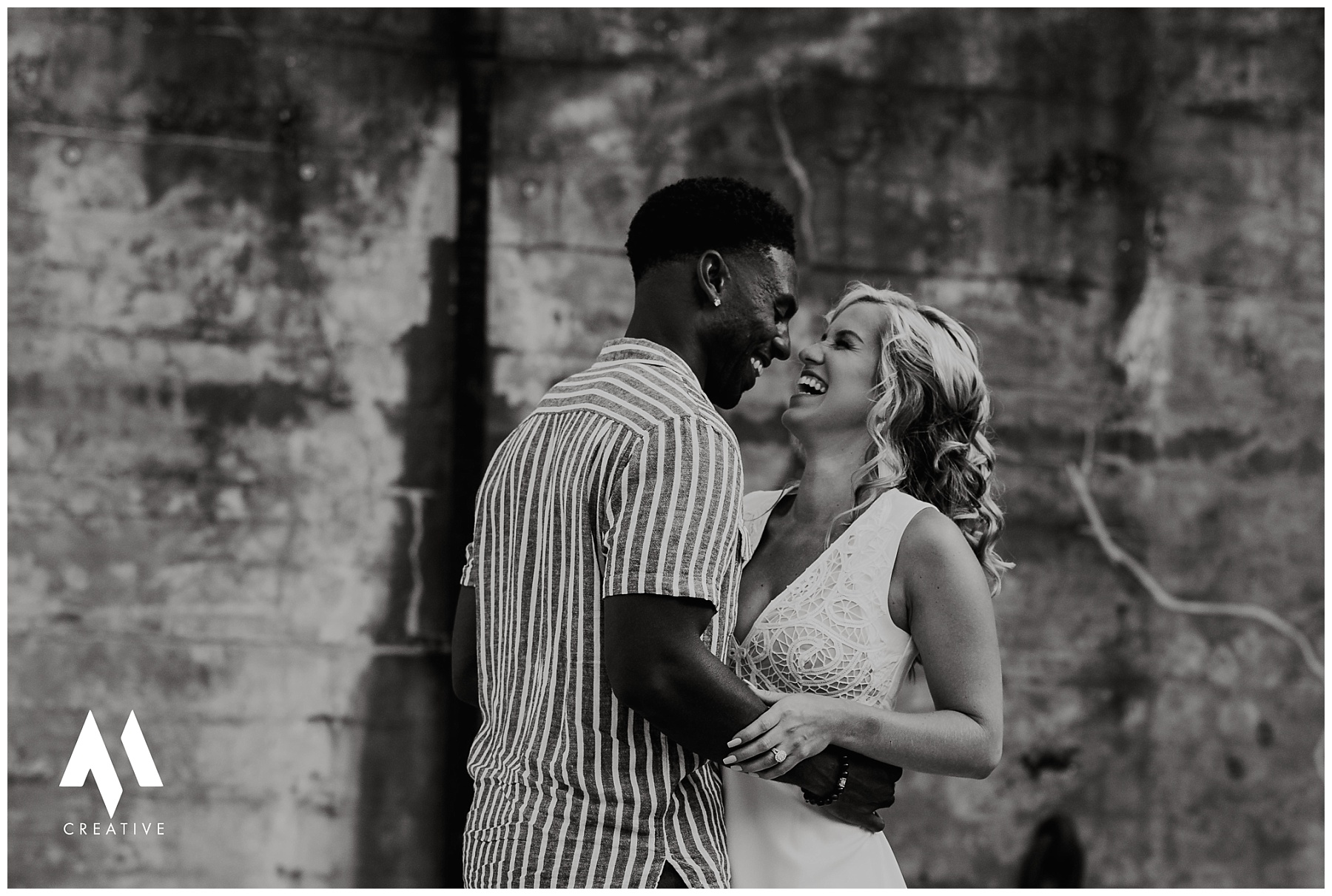 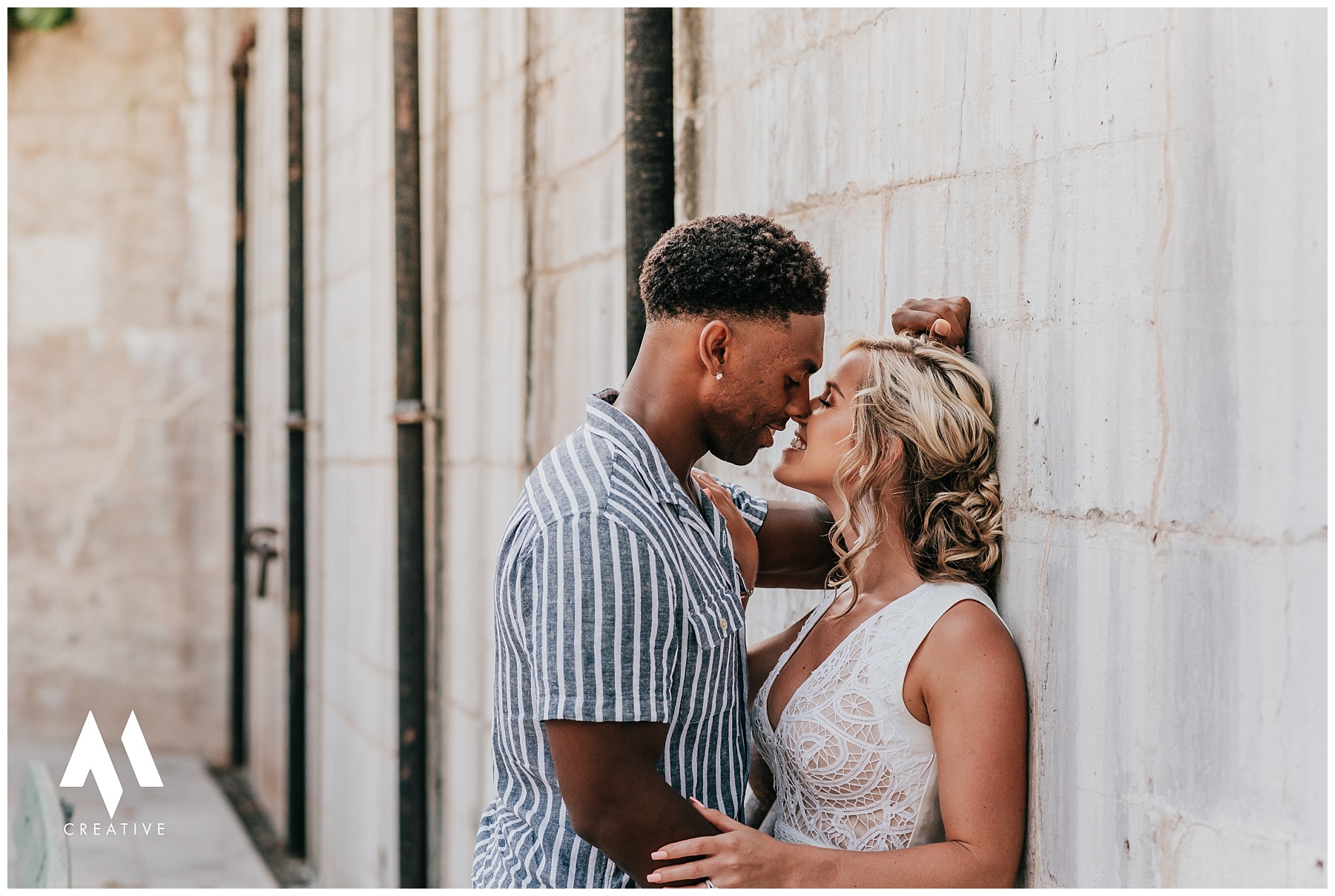 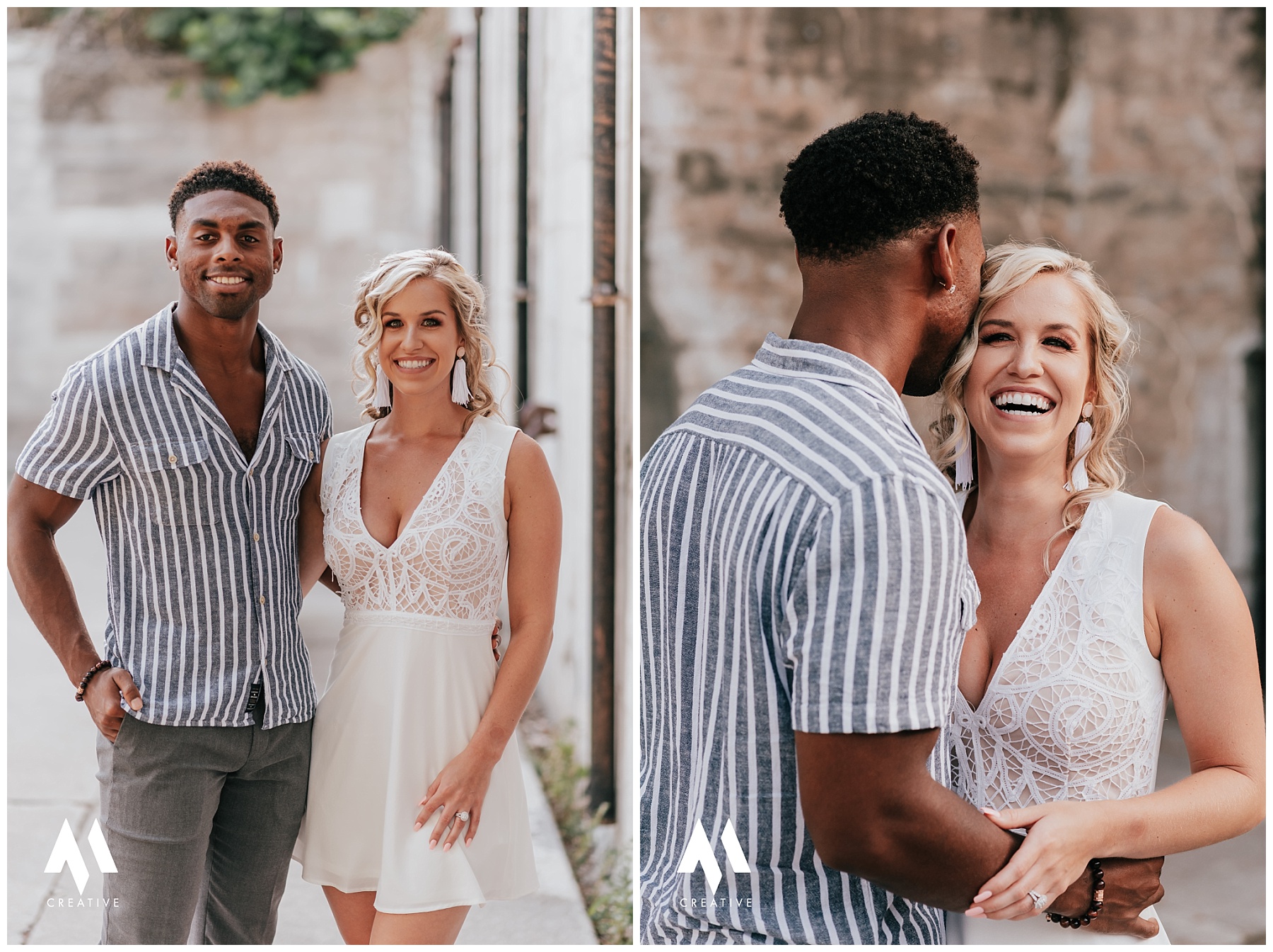 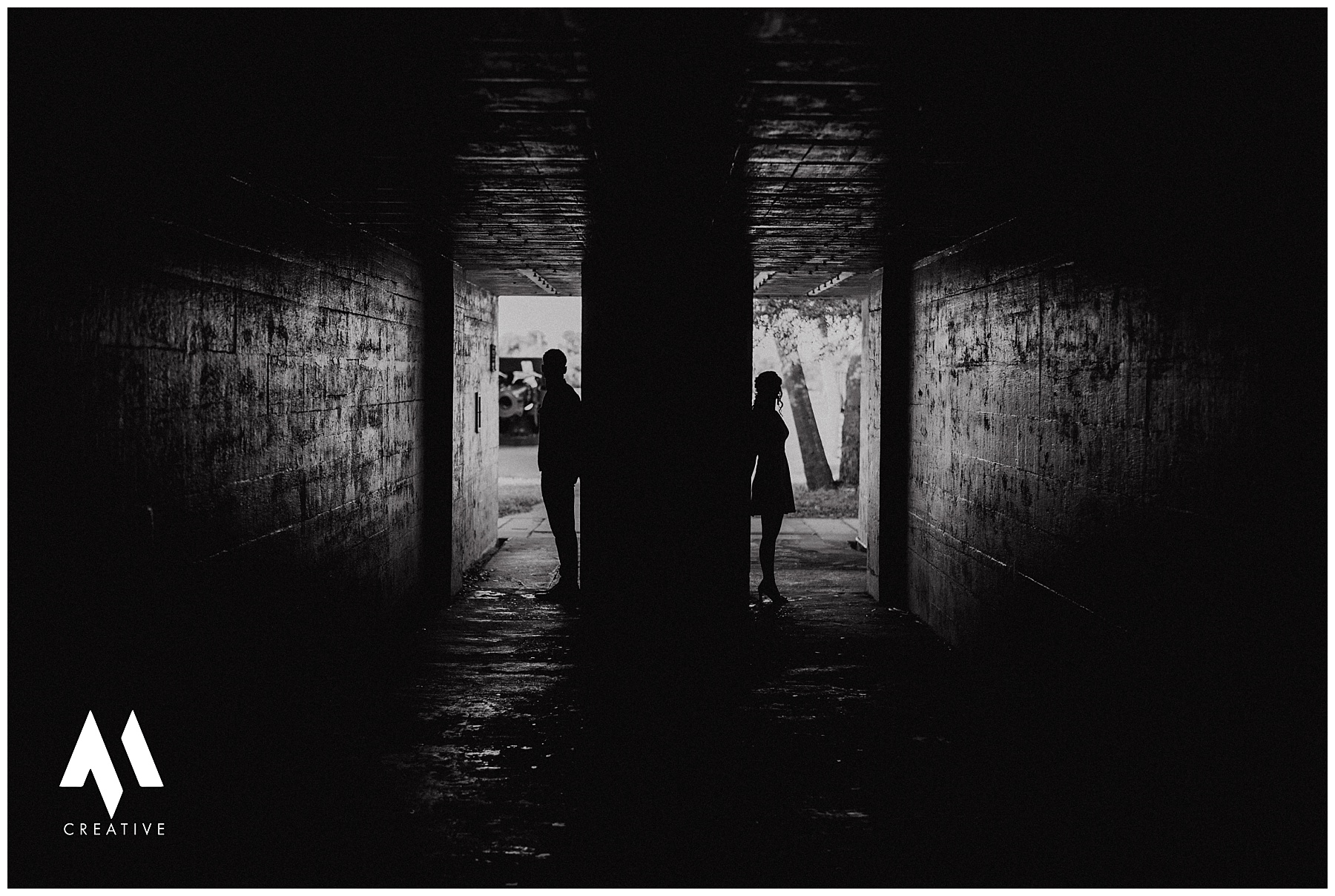 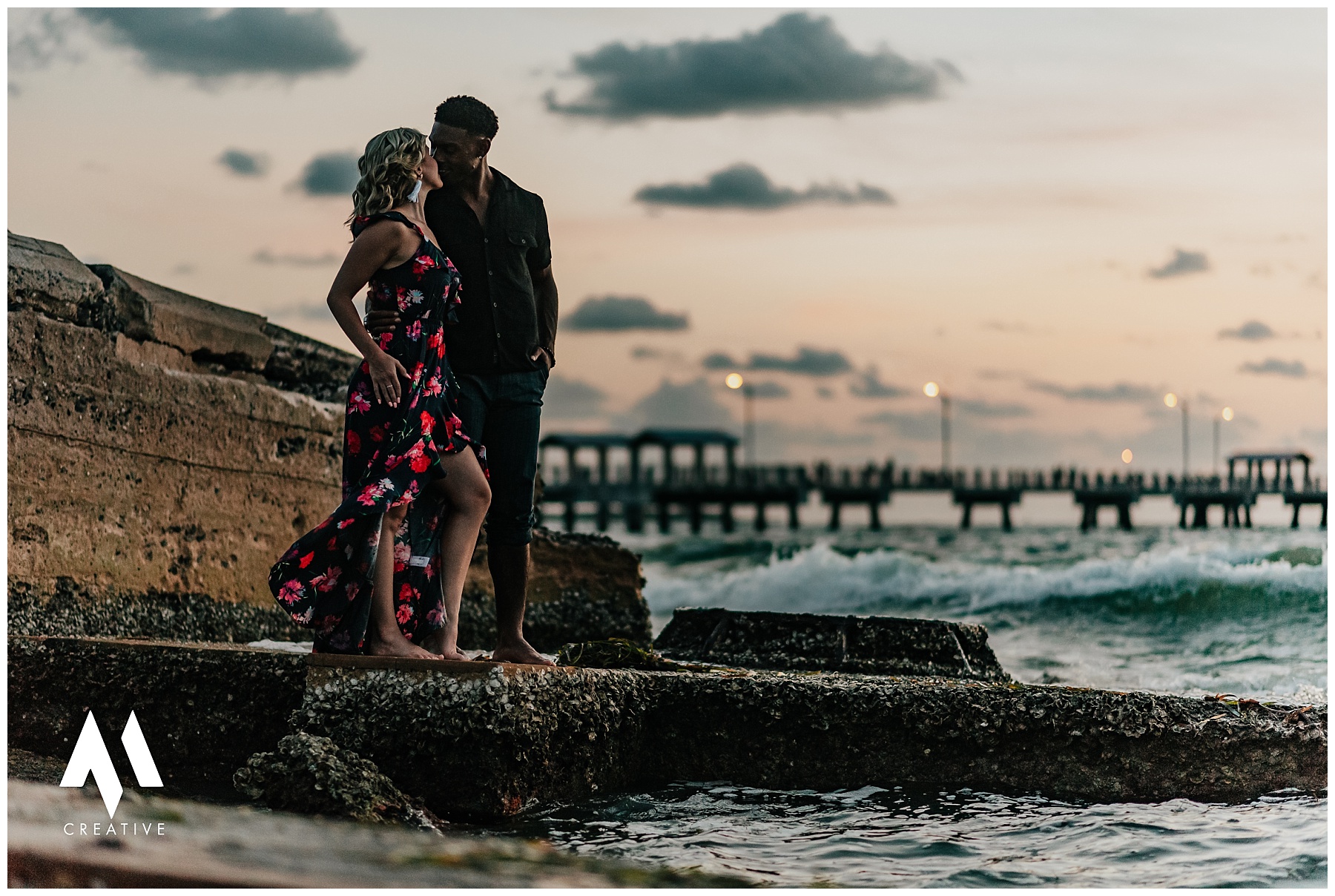 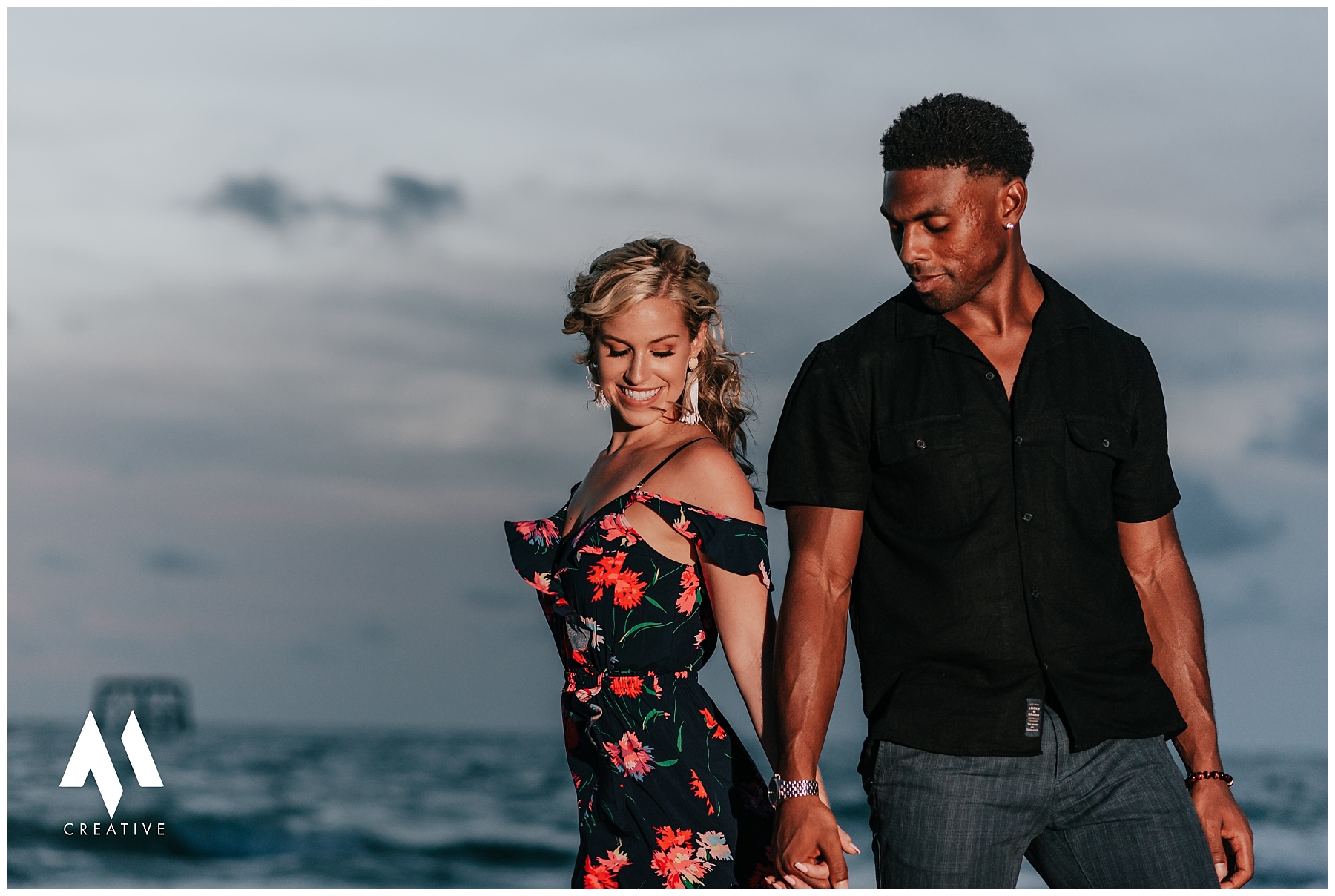 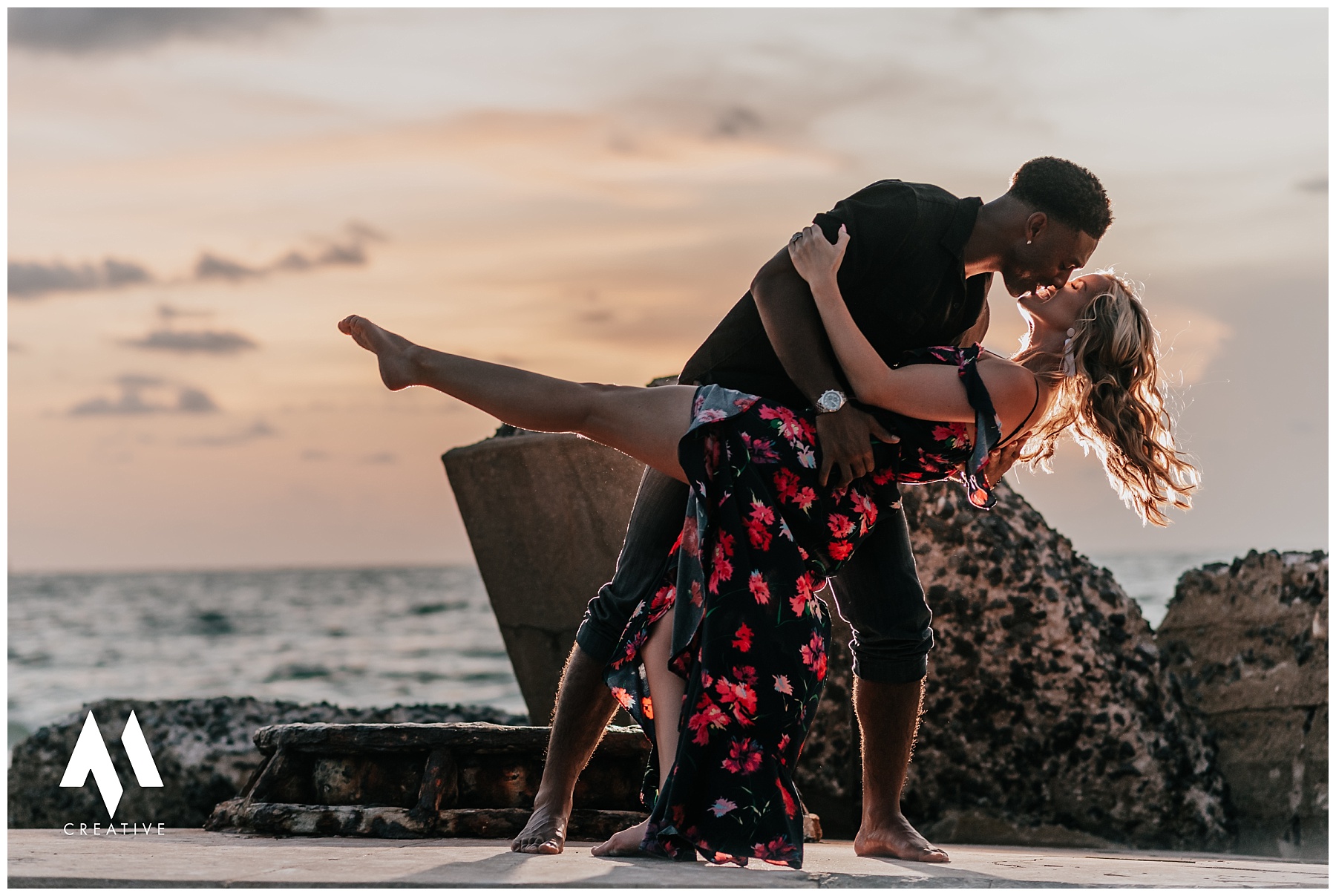 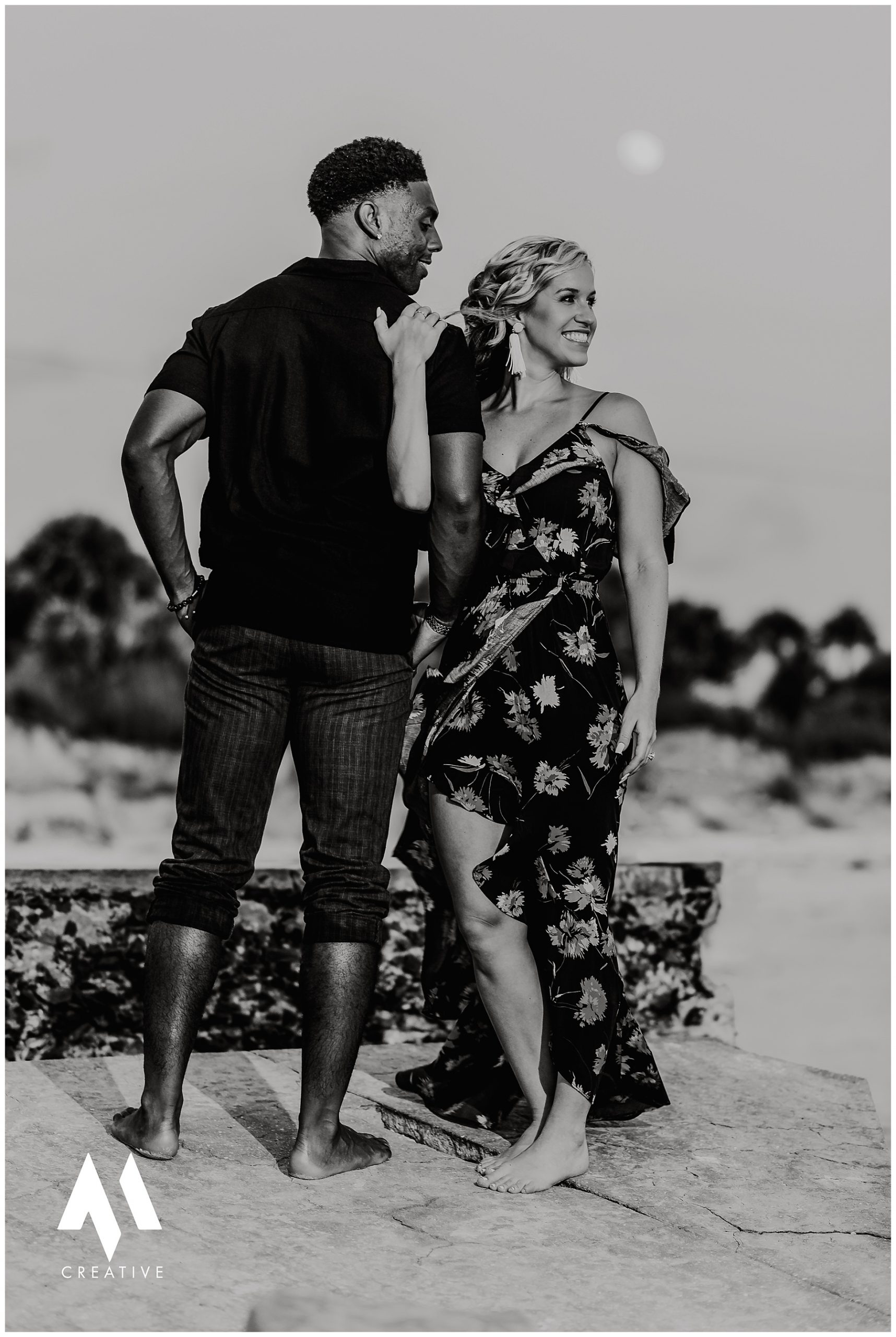 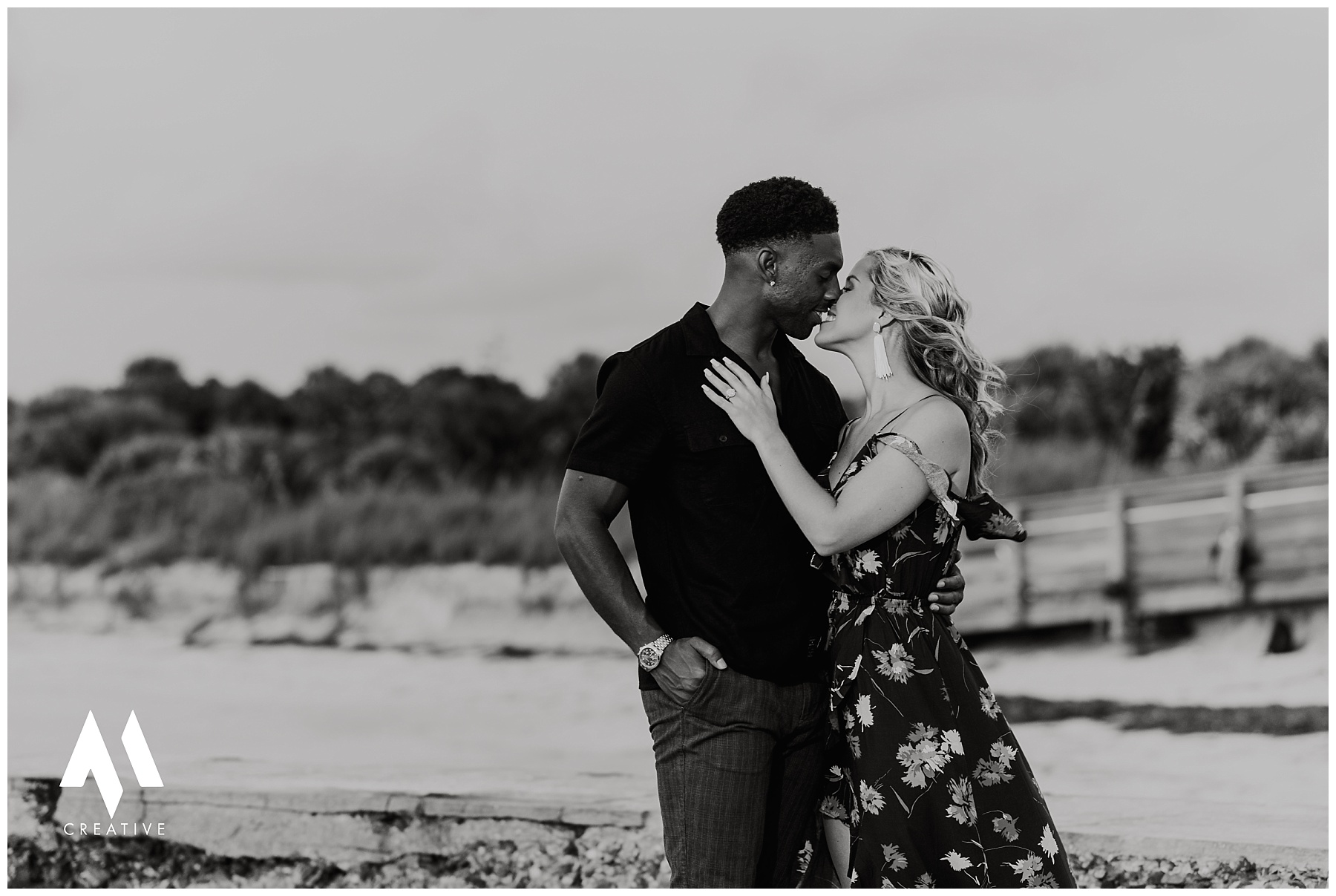 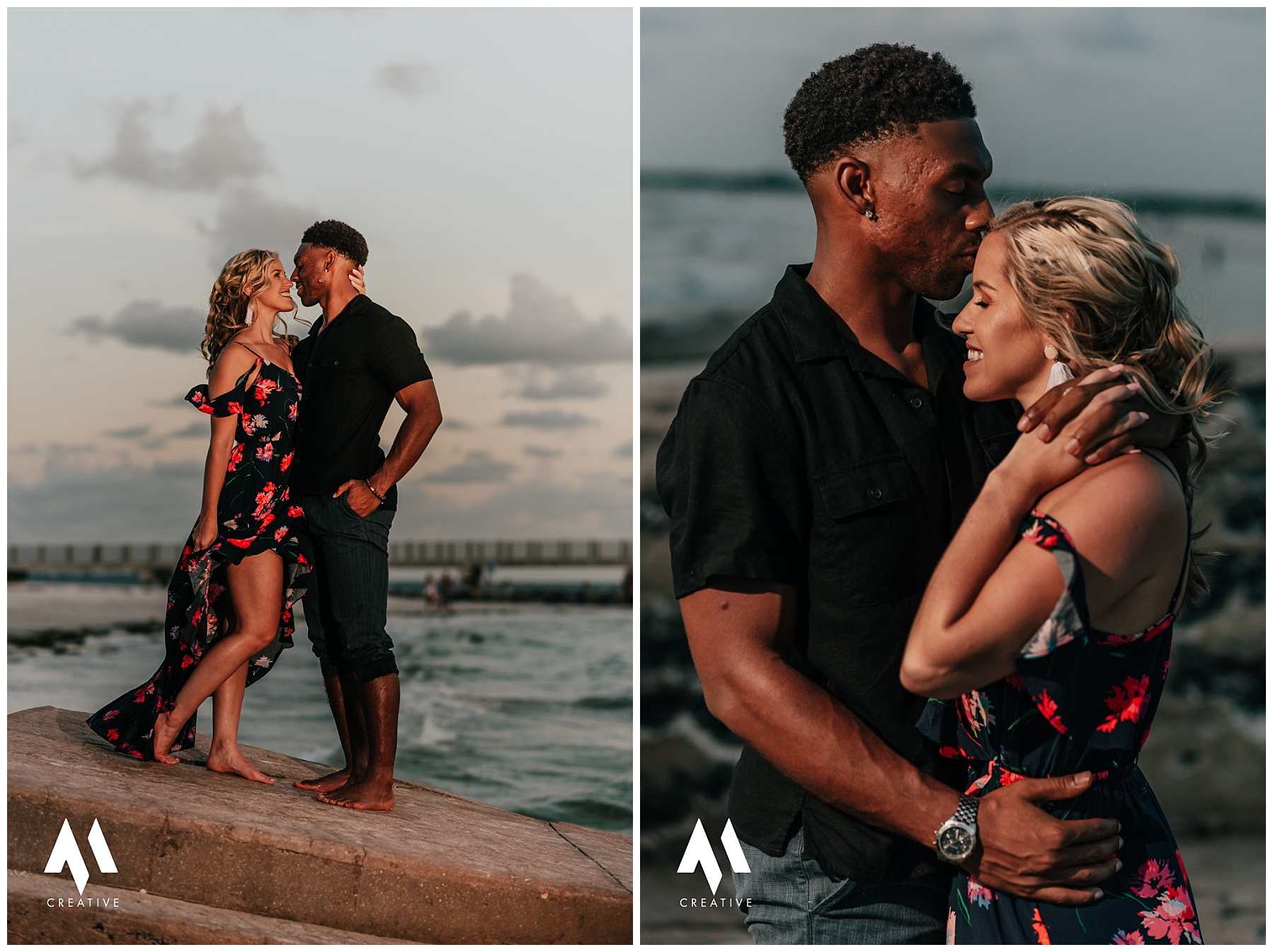 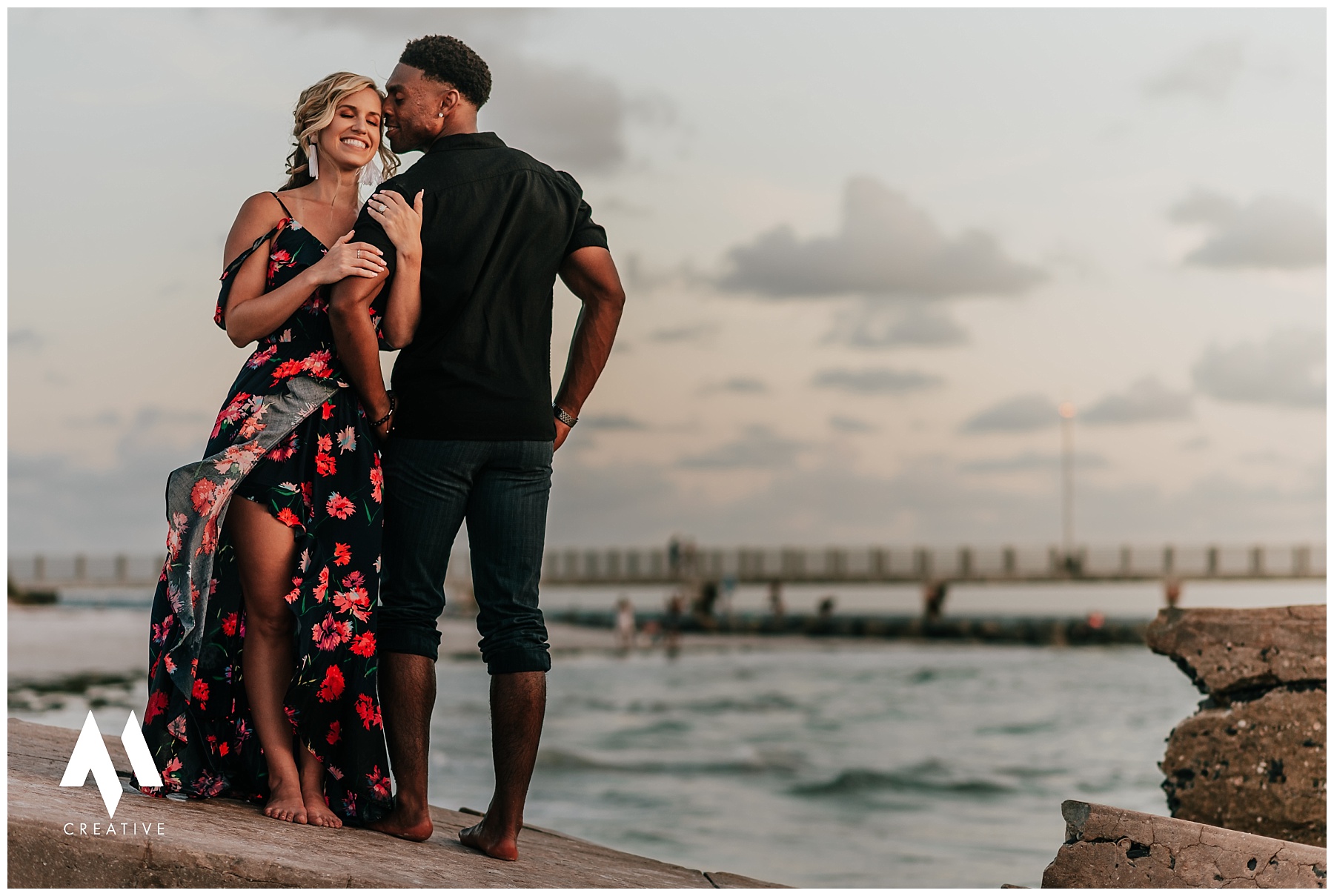